One of my Highlights during my semester abroad was a Trip to the Google Office, the Twitter Headquarters (HQ) and a Code for America meeting in San Francisco on Wednesday the 25th of October.

During an Above and Beyond Computer Science (ABCS) session at the California State University in Monterey Bay (CSUMB), Erik talked about life at Google. Erik is a Senior Software Engineer at Google in San Francisco. After the ABCS-Session I got in contact with Erik and we started planning a Lunch at Google. Before the Trip we planned together many things like transportation, parking, coffee stop at Twitter and the visit from the Code for America Meeting.

Together with five other CSUMB Students, we started at 09:30 AM at CSUMB to get to San Francisco, we planned for the ride to be 2:30h. After we got to 345 Spear St. in San Francisco, we checked in as visitors at the Google Office on the 3rd Floor. After checking in we had Lunch together with Erik and some of his colleagues. The Lunch was an All-You-Can-Eat Cafeteria, with pretty awesome food. They had options for every diet.

We spent around one and a half hour for lunch and conversed together. It was nice to hear from the people in the industry. After the lunch, we toured through the Google building and we saw many different themed cafes like a music café and a nature café with real plants.

At 02:30 PM we met up at the Twitter HQ with two Software Engineers from Periscope. To the Twitter HQ we took the Muni, a public transportation service in San Francisco.

Something really special in the Twitter HQ was, that they had free beer and wine for the Twitter employees. We had a Q and A with the Software Engineers from Periscope, it took around one hour. At the Twitter HQ there is a PhotoBox, where you could take really funny pictures and GIF’s and upload them directly to Twitter.

After our visit at Twitter we went at 06:00 PM to the Code for America meeting. There they provided Pizza for the attendees. The members from Code for America presented different projects, that could benefit the City of San Francisco through coding.

From this experience, I was able to learn more about how it is being a Software Engineer at Google and Twitter, and how the Software Community in the Bay-Area around San Francisco work together.

Finally, I would say it was totally worth it to skip one day of four classes for this incredible opportunity. 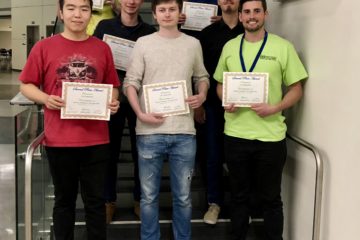